Great - We have four new babies in the house - and OH! I went to the doctor

Mom and dad came home with four new babies, what the heck!? This is what they got below -  and there are three of them just like that one, and there is this one fish that puts his face against the aquarium glass and just eats all the algae - Gross!

Mom and dad also got these clips that go on the side of the aquarium so I can’t ever play with the fish ever again. NOT FAIR!

To add insult to injury, I had to go to the doctor for a check up because I’m a baby, and they said I needed a baby well check. I feel great I don’t need to be checked out by any doctor but I had to go because mom made me. They took my temperature you know where and they didn’t even prepare me. I didn’t like it one bit. But after that unpleasantness I got to meet my doctor and he was really cool – he thought I was pretty cool, and he held me like a baby which I love, he rubbed my belly, and gave me medicine which I opened my mouth for because I’m cool that way.

I weighed 4.5 pounds and he says I have a lot of growing to do and I’m very calm and content – little does he know.  My family and the vet also thinks that I behave like a dog. Great.

Anyhow everybody in the family loves the stupid fish and they just make me agitated sometimes but I’ll get used to it I guess.  Nobody understands – I want to do is play with them and splash in the water but they won’t let me in.  So when I watch them they stick their tongues out at me – and yes fish have tongues, they give me the side I and they also taunt me.  Eleanor could care less about these fish but I care enough about them for the both of us.

I need to go take a nap because we have the alarm set for 11 o’clock that’s when we get to get up and party at least until one or two until we settle down and go to sleep again. Love, Jane 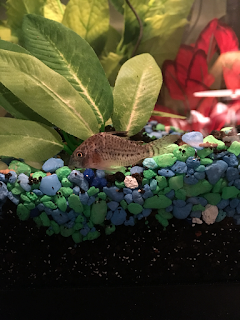 And their names are really funny Curly, Larry and Moe -  and the suckerfish is named Trump, because - well he sucks .  That name was our dad’s idea. 😈😈😈
Posted by Adventures of Eleanor and Jane at 9:56 PM